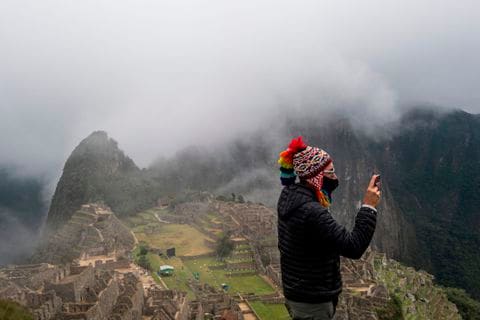 Machu Picchu, one of the most visited tourist destination in Peru, has reopened to daily visitors this week for the first time after 8 months of tourism shutdown. The ancient Inca citadel, which previously saw up to 5,000 travelers per day in pre-pandemic high season, will now allow only 675 visitors per day, according to report.


Eight months after the coronavirus pandemic prompted Machu Picchu’s closure, Peruvian officials held a reopening ceremony for the site on Sunday that highlighted local traditions as well as its reception of a “Safe Travels” stamp, a global standard of health and safety protocols laid out by the World Travel and Tourism Council (WTTC).

“Today I am proud to deliver the Safe Travels seal to the Machu Picchu destination. Now visitors as soon as they think of returning to our wonder of the world will be sure that strict biosecurity protocols are followed here. Tourism is returning, responsibly and gradually,” Tourism Minister Rocío Barrios announced at the ceremony.

The reopening of Machu Picchu kicks off new efforts to restart tourism in Peru, including its reopening of land borders and resumption of flights from Colombia, Panama, Uruguay, Ecuador, Bolivia, Paraguay, and Chile. According to Peru’s tourism board, international flights under eight hours resumed in October.

In October, the popular hiking destination opened for one day to a lucky traveler from Japan who had been living in the area since being stranded in the country when it went into lockdown in March. Jesse Katayama, 26, taught boxing lessons to children in Aguas Calientes for several months before the government allowed the site to open for him. Locals had brought Katayama’s case to the Peruvian Ministry of Culture ahead of his scheduled departure from the country, and officials made an exception.

Travel industry prepares to do business at WTM Virtual

Norwegian Air has filed for bankruptcy protection in Ireland